Indie-chamber septet Nonsemble bring their emotive, rhythmically charged music to Sydney for the first time in Extended Play 2019, with an immersive audiovisual program featuring two of the most-loved works from their founder and lead composer Chris Perren.

The adventure begins with Samurai Loops (2015), for two pianos, electronics and visuals. Featuring both of Nonsemble’s pianists performing together, the piece takes footage from the 1967 film Samurai Rebellion, transforming the film's all-too-brief pivotal moment into a gripping musical journey. Part of Perren’s unique ongoing exploration into how complex polyrhythmic patterns can be reflected and elucidated by moving images, Samurai Loops expertly demonstrates Chris’ artistic aim—weaving together cerebral rhythmic experiments into an emotionally engaging story. It was recently selected for New York’s prestigious MATA festival, where it received great acclaim from audiences and organisers.

The second piece is Nonsemble’s most significant work so far. A 30 minute work using the moves of 1953 championship game of Go, Go Seigen vs. Fujisawa Kuranosuke is an experiment in extracting musical ideas from abstract patterns and sequences, and allowing these ideas to develop intuitively into a large-scale work. CutCommon’s Steph Eslake describes the result as blending “post-rock and minimalism to craft a monumental contemporary classic”. Written and premiered in 2014, the piece has been performed in America at the Bang on a Can Summer Festival, across Norway as part of DonkeyJam’s “Games For Ensemble” Tour, and has been featured numerous times on WNYC’s New Sounds with John Schafer. However, it has only twice been performed with the full live visuals crafted to accompany its premiere, and both of these only in Brisbane. This is the first time Go Seigen will be performed in New South Wales, and the first performance with Jaymis Loveday’s bespoke visual accompaniment outside of Brisbane.

It rocked – quite literally.

Nonsemble inhabit a space between contemporary classical and adventurous pop music, resulting in a diverse output that ranges from sprawling and evocative modern compositions to meticulously crafted chamber-pop. Since forming in 2012, they’ve released two critically acclaimed albums and an EP, played alongside Sigur Ros and Beck at Harvest Festival, were invited to play and talk at TEDxBrisbane, and have toured across Australia, featuring performances at Tasmania’s MONA and Brisbane’s GoMA.

A septet consisting of piano, string quartet, drums and guitar (plus the occasional blast of electronics), the group’s musical backgrounds are as varied as their output: classically trained instrumentalists and seasoned rock players whose musical interests range from obscure electronica and instrumental math-rock to early baroque music. This unique setup and blend of influences provides for a wide palette of sounds. Olafur Arnalds-esque lushness meets Joanna Newsom jubilance, while the shimmering brightness of minimalist composers such as Steve Reich and John Adams rubs shoulders with the intensity of Godspeed You Black Emperor or 65daysofstatic. Nonsemble have a penchant for the rhythmically complex, but theirs is a music where the heart always wins—often in spite of heavy doses of heady conceptualism.

To find out more about Nonsemble visit nonsemble.wordpress.com or view their social media channels below.

Buy Tickets
Listen to their music Listen to their music

Read their review from Cut Common 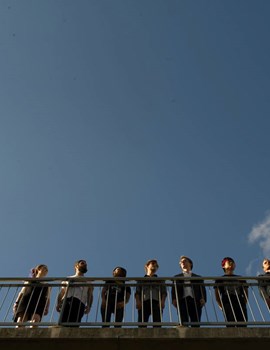 Read their review from Cut Common